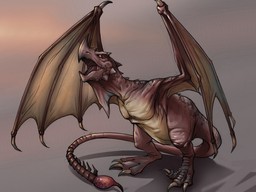 Although it has similarities to a European dragon, the legendary Wyvern differs in having only two legs, with large wings instead of front limbs, and sometimes with eagle's claws on the tips. It is unsure whether Wyverns breathe fire, like most dragons, but they have deadly arrow-shaped barbs at the ends of their tails for killing their prey. In medieval Europe, Wyverns were associated with war, pestilence, and plague. Today, images of them can be seen as heraldic emblems on arms, crests, and flags--usually as a symbol of strength and endurance.  This magnificent creature is depicted in modern times as a vicious, malign predator. In Heraldry, its supposedly envious and warlike attributes where used to put fear in the heart of the enemy. Even today it is feared amongst the most brave of warriors, and its breath is said to bring pestilence and disease.
However, the truth about this great beast is quite different, for we are told by those who have studied it, that the Wouive is really a gentle and magical dragon, empathetic with all of nature's creatures, and brings life and knowledge to everyone as it moves around the earth. Its breath - far from being dangerous - can lead to inspiration and enlightenment for all those touched by it.