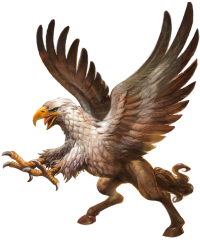 A Hippogriff is a legendary creature, supposedly the offspring of a Griffin and a mare. Like a Griffin, it has the head of an eagle, claws armed with talons, and wings covered with feathers, the rest of its body being that of a horse.
The reason for its great rarity is that Griffins regard horses as prey. It has been suggested this idea was strong enough in medieval times to produce an expression, "to mate Griffins with horses", which meant about the same as the modern expression, "When pigs fly". The hippogriff was therefore a symbol of impossibility and love.
The Hippogriff is easier to tame than a griffin. In the few medieval legends when this fantastic creature makes an appearance, it is usually the pet of either a knight or a sorcerer. It makes an excellent steed, being able to fly as fast as lightning. The hippogriff is said to be an omnivore, eating either plants or meat.
Hippogriffs dive at their prey and strike with their clawed forelegs. When they cannot dive, they slash with claws and beak. Mated pairs and flights of these creatures attack in concert, diving repeatedly to drive away or kill intruders. Hippogriffs fight to the death to defend their nests and their hatchlings, which are prized as aerial mounts and fetch a handsome price in many civilized areas.
Another description of the Hippogriff can be found in Arnold Sundgaard's poem, The Hippogriff:
When Mare and Griffin meet and mate
Their offspring share a curious fate.
One half is Horse with hooves and tail,
The rest is Eagle, claws and nail.
As a Horse it likes to graze
In summer meadows doused in haze,
Yet as an Eagle it can fly
Above the clouds where dreams drift by.
With such a Beast I am enthralled,
The Hippogriff this beast is called.