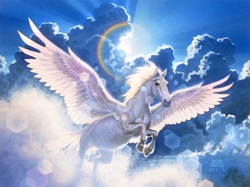 PEGASOS (or Pegasus) was an immortal, winged horse which sprang forth from the neck of Medousa when she was beheaded by the hero Perseus. Pegasos was tamed by Bellerophon, a Korinthian hero, who rode him into battle against the fire-breathing Khimaira. Later, after the hero attempted to fly to heaven, the gods caused the horse to buck, throwing him back down to earth. Pegasos continued to wing its way to heaven where it took a place in the stables of Zeus.

The horse was also placed amongst the stars as a constellation, whose rising marked the arrival of the warmer weather of spring and seasonal rainstorms. As such he was often named thunderbolt-bearer of Zeus.

The symbolism of Pegasus varies with time. Symbol of wisdom and especially of fame from the Middle Ages until the Renaissance, he became one symbol of the poetry and the creator of sources in which the poets come to draw inspiration, particularly in the 19th century. Pegasus is the subject of a very rich iconography, especially through the ancient Greek pottery and paintings and sculptures of the Renaissance. Personification of the water, solar myth, or shaman mount, Carl Jung and his followers have seen in Pegasus a profound symbolic esoteric in relation to the spiritual energy that allows to access to the realm of the gods on Mount Olympus.