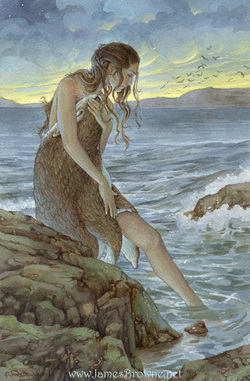 Selkies are mythological creatures found in Faroese, Icelandic, Irish, and Scottish folklore.  Selkies are said to live as seals in the sea but shed their skin to become human on land. The legend apparently originated on the Orkney and Shetland Islands and is very similar to those of Swan Maidens.

Stories concerning selkies are generally romantic tragedies. Sometimes the human will not know that their lover is a selkie, and wakes to find them gone. In other stories the human will hide the selkie's skin, thus preventing it from returning to its seal form. A selkie can only make contact with one human for a short amount of time before they must return to the sea. They are not able to make contact with that human again for seven years, unless the human is to steal their selkie's skin and hide it or burn it. 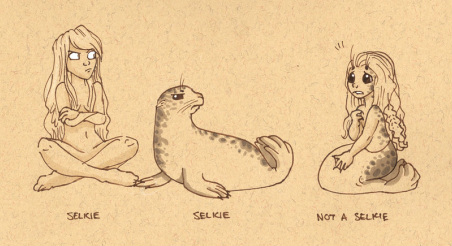