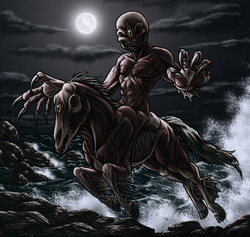 A creature from Northern folklore, the Nuckelavee is the most horrible of all the Scottish elves. He lives mainly in the sea, but was also held responsible for ruined crops, epidemics, and drought. His breath could wilt the crops and sicken the livestock.

The Nuckelavee resembles a centaur whose legs are part fin; he has an enormous gaping mouth and a single giant eye, which burns with a red flame. Some sources, such as Katharine Mary Briggs' Abbey Lubbers, Banshees, and Boggarts, describe him as having both a horse's head and a human head and torso, the latter growing out of his back.

Arguably the most gruesome detail of the Nuckelavee's appearance is the fact that he has no skin. Black blood courses through yellow veins, and the pale sinews and powerful muscles are visible as a pulsating mass. The Nuckelavee has an aversion to running water, and those who are chased by him have only to cross a stream to be rid of him. Some reports claim that he is simply a very large head on two small arms, with all of the other characteristics mentioned above.

Another phobia that the Nuckelavee suffers from is the burning of seaweed to create soda ash, called kelp locally. Enraged, he starts on a wild rampage of plague, killing cattle and many other creatures, and bringing bad crops. At this time, the only person to stop him is the Mither o' the Sea, another ancient divine being in Orkney mythology.