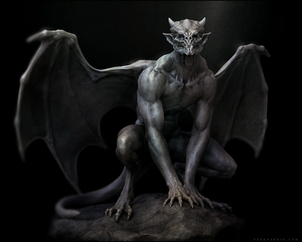 Gargoyles are usually lumped into one category as the strange and horrific carvings and statuary on buildings. Serving as spiritual guardians these stone monsters watch over the city by night and observe all that pass below them. While all such creatures are termed gargoyles a true gargoyle is one that serves as a water spout. The name Gargoyle comes from the Old French "gargouille" and the Late Latin "gurgulio", both meaning throat. These were the early rain gutters and served to direct water away from buildings. The other creatures that adorn a building but do not serve as a water spout are known as grotesques. Many gargoyles and grotesques are anthropomorphic, zoomorphic, and very monsterous. Still gargoyle has become the all encompassing term used to define the creatures carved on architecture and guarding the gardens of those who love the hideous creatures.

The Medieval period held many superstitious stories and legends and produced great works of structural art. Among these are the gargoyles that decorated their churches and important buildings. The stone carvings served as illustrations and books for those that were illiterate, documenting stories and life and recording it in an indestructable image that all could see and understand with ease. Some gargoyles date back to ancient Greece and Rome and were constructed out of terra cotta. No one truly knows the origins and reasoning behind the gargoyles although many theories and legends have arisen in recent times. Whether they are actually valid, no one knows for sure.

In Medieval times religion and superstition sometimes walked hand in hand and were very important to the people. Many looked to gods and goddesses, spirits and ghosts, or other supernatural entities for guidance, fundamental answers to life's problems, and for protection.

The people could see no better protection from evil spirits than placing images of supernatural beings upon their places of worship. These stone creatures would work for you and guard you from those that would seek you harm. One might have thought that holy images would have been used and indeed many hold the crucifix to be a powerful emblem of god but in other aspects it was frowned upon to carve an image of God upon one's place of worship. It was presumptuous to know what God looked like. Images of Christ were also thought of but he was merely a man and already inside this house of God. Perhaps even images of the old Gods were thought of but to carve the images of ancient Gods upon the house of the only true God was blasphemy. It was merely a logical step to take the guardian aspects of the gargoyle and use them as protectors, especially since they were known in myths to be guardians and have powerful abilities.

Myth Of The Gargoyle

Gargoyles were known to stand guard and ward off evil spirits and frighten away other creatures that sought harm. The more hideous and frightening in appearance is all the better to scare off all sorts of dark creatures. At night they come to life and protect while one is asleep and vulnerable. And the winged gargoyles can fly around the whole area and cover an entire village or town as well as the church. As the sun rises the Gargoyles resume their place once more to serve as guardians during the day when their fierce visage can be seen and frighten off those that see their faces. One other myth dating back to ancient greece is that a gargoyle can purify any tainted water, and seeing as how many served a functional purpose as rain spouts, it was thought that when it rained they purified the water descending from the skies and prevented diseases and foul water supplies.

There are many meanings and symbolism that dwell within the stone guardians.

Figures in fact from the 5th century celts who were in fact head hunters. They worshipped the severed heads and claimed that they held powerful forces. To gaze within their eyes would reveal their powerful nature to the beholder.

Figures of ambiguous gender and species are frequently encountered in the world of gargoyles. Ancient people were no different from people today in finding amalgrams of male/female or human/animal bodies somewhat frightening. Pagan religion existed to confront and surmount chaos and danger. Chaos is represented by lifeforms which do not fit into known categories.

You will find that an inordinate number of gargoyles have their mouths wide open and their tongues protruding. The mouth pulled open is a frequent symbol of devouring giants. In order to convey size in a small sculpture, much smaller figures are placed next to the "giant". The act of pulling the mouth open is a threatening gesture which serves to remind us that we are vulnerable to forces larger than ourselves.

The Celts often depicted a human head entwined with foliage. Branches coming from the mouth or crowning the head were a sign of divinity. Often, the branches are of the oak tree which was sacred to the Druids. Images like this have come to be called "Jack O'Green" or "The Green Man"

Fertility was the major theme of pagan religions, and fertility symbols were not excluded from cathedral walls. If these symbols were on the outside walls, they might scare off evil spirits. This would explain how some fairly crude sexual imagery came to be preserved on the outer walls. However, some would argue that these images may arouse more than they discourage. The most crudely sexual image is perhaps that of Sheelagh-na-Gig, commonly found on medieval Irish churches. Her eyes are typically round and deeply drilled, with no mouth and an obscene pose. Sheela Na Gigs are quasi-erotic stone carvings of a female figure usually found on Norman churches. They consist of an old woman squatting and pulling apart her vulva, a fairly strange thing to find on a church.

From the stone guardians that adorn the cathedrals and churches of old, and the legends of their protection, sprang a tale of fantasy and wonder in a cartoon known simply as Gargoyles. By day they are merely stone creatures to adorn buildings, by night they are defenders of a city.True it is just a cartoon, a show of fancy and imagination, but aren't all great creatures born from the imagination?

Out of all the myths, legends, and guesses that have gone into the reasoning for gargoyles, I think that they speak most eloquently for themselves when you view the beautifully horrific images that adorn a cathedral or sit quietly in a garden. Whether they truly do guard us from evil spirits or just adorn our lives, perhaps it is good to know that they are still on watch when the darkness is thick about and the sun is far from our eyes.