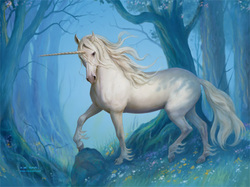 The Unicorn is a legendary animal from European folklore that resembles a white horse with a large, pointed, spiraling horn projecting from its forehead, and sometimes a goat's beard and cloven hooves. First mentioned by the ancient Greeks, it became the most important imaginary animal of the Middle Ages and Renaissance when it was commonly described as an extremely wild woodland creature, a symbol of purity and grace, which could only be captured by a virgin. In the encyclopedias its horn was said to have the power to render poisoned water potable and to heal sickness.


Though written accounts of Unicorns date back only two and a half millenia, depictions of the one-horned beast can be found as far back as Humankind's history goes. He was known and worshipped in ancient Babylon, the very crucible in which civilisation was born. Two of the guiding powers in these times were the Sun and Moon, represented by the Lion and the Unicorn. The Lion, golden yellow, ruling through strength and dominating all, constantly chases the Unicorn, silver white, who rules through harmony and strength of cooperation. Seldom does the Lion ever catch his prey, yet when he does, it is the Sun and not the Moon that is obscured. 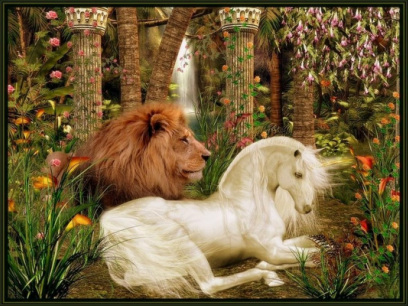