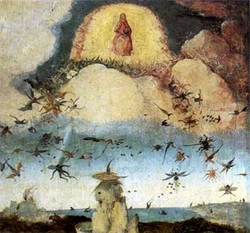 Also known as Manx fairies or Cloan ny moyrn (which means the Children of Pride/Ambition) Adhenes were regarded as having been fallen angels cast from heaven but too good for hell. They could be benevolent but were mostly mischievous in association with humans, taking babies or wives when they wished, although it was believed that their powers were not effective over any human on an errand of mercy. They are about the size of a small child when visible