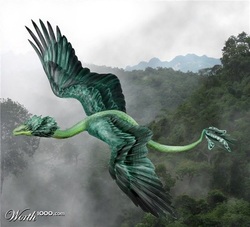 The American Amphithere (Draco americanus tex), or Moth Dragonas it only hunts at night, is not known for a sanguine outlook. Instead, it will bite at anything.

It is 15 feet long and 8 to 10 feet high. Colouration is typically iridescent purple with a yellow belly and wings, although red, blue and green have been seen. It has a high-pitched squawk and, unusually, flocks together. Moth dragons will eat any large mammals, mainly bison and sometimes including unwary cowboys. They can breathe fire and hover, with their prefered lair high up in sandstone valleys such as Monument Valley in Utah. Eggs are bright green with phosphorescent paler green markings. The chicks can fly from birth but are quite uncertain for a few years.

In the Southeastern United States, they have been known to eat mostly children.