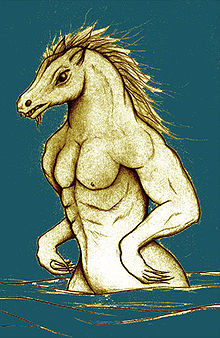 The each-uisge (Scottish Gaelic: [ɛxˈɯʃkʲə], literally "water horse") is a mythological Scottish water spirit, called the each-uisce (anglicized as aughisky) in Ireland. It is similar to the kelpie, but far more vicious.

The each-uisge, a supernatural water horse found in the Highlands of Scotland, is supposedly the most dangerous water-dwelling creature in the British Isles. Often mistaken for the Kelpie (which inhabits streams and rivers), the each-uisge lives in the sea, sea lochs, and fresh water lochs. The each-uisge is a shape-shifter, disguising itself as a fine horse, pony, or handsome man. If, while in horse form, a man mounts it, he is only safe as long as the each-uisge is ridden in the interior of land. However, the merest glimpse or smell of water means the end of the rider: the each-uisge's skin becomes adhesive and the creature immediately goes to the deepest part of the loch with its victim. After the victim has drowned, the each-uisge tears him apart and devours the entire body except for the liver, which floats to the surface.

In its human form it is said to appear as a handsome man, and can be recognised as a mythological creature only by the water weeds in its hair; because of this, people in the Highlands were often wary of lone animals and strangers by the waters edge, near where the each-uisge was reputed to live.

Along with its human victims, cattle and sheep were also often prey to the each-uisge, and it could be lured out of the water by the smell of roasted meat.