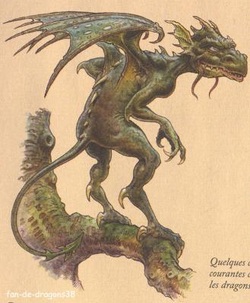 The Gargouille (known as Garguiem), not to be confused with gargoyle, was allegedly a serpent-like water-spouting dragon that appeared in the Seine River in France. It was said to terrorize boats and flood the land. In the legend, Saint Romain, the archbishop of Rouen, lured the monster to shore using a convict, and then made a cross with his fingers to tame the monster. He then led it into town where it was slaughtered. Some accounts said it was burned. The accounts of burning said that neither the monster's head or neck would burn, so they were mounted on the town's cathedral to display God's power.

The creature was then said to have been carved onto buildings to be used as a water drainage, therefore creating the modern Gargoyle. It is similarly accounted that they have no relation other than their water-spouting abilities, leading to the words' similarities