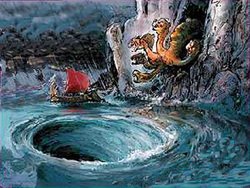 In Greek mythology, Scylla and Charybdis were a pair of monsters who lived on opposite ends of the Strait of Messina between Italy and Sicily. Scylla was originally a sea nymph who was loved by the sea god Poseidon*. Out of jealousy, Poseidon's wife Amphitrite poisoned the waters in which Scylla bathed. This turned Scylla into a six-headed beast with three rows of sharp teeth in each head. When ships passed close by her, she struck out to grab and eat unwary sailors. Charybdis was also a sea nymph, as well as the daughter of Poseidon. Zeus transformed her into a dangerous whirlpool across the strait from Scylla. Ships sailing the strait were almost certain to be destroyed by one of the monsters.

Scylla and Charybdis were mythical sea monsters noted by Homer; later Greek tradition sited them on opposite sides of the Strait of Messina between Sicily and the Italian mainland. Scylla was rationalized as a rock shoal (described as a six-headed sea monster) on the Italian side of the strait and Charybdis was a whirlpool off the coast of Sicily. They were regarded as a sea hazard located close enough to each other that they posed an inescapable threat to passing sailors; avoiding Charybdis meant passing too close to Scylla and vice versa. According to Homer, Odysseus was forced to choose which monster to confront while passing through the strait; he opted to pass by Scylla and lose only a few sailors, rather than risk the loss of his entire ship in the whirlpool.

Because of such stories, having to navigate between the two hazards eventually entered idiomatic use. There is also another equivalent English seafaring phrase, "Between a rock and a hard place". The Latin line incidit in scyllam cupiens vitare charybdim (he runs on Scylla, wishing to avoid Charybdis) had earlier become proverbial, with a meaning much the same as jumping from the fire pan into the fire. Erasmus recorded it as an ancient proverb in his Adagia although the earliest known instance is in the Alexandreis, a 12th-century Latin epic poem by Walter of Châtillon.