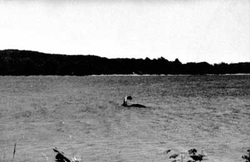 Champ, or Champie, or Big Rem, is the name given to a reputed lake monster living in Lake Champlain, a natural freshwater lake in North America, partially situated across the U.S.-Canadian border in the Canadian province of Quebec and partially situated across the Vermont-New York border. While there is no scientific evidence for the cryptid's existence, there have been over 300 reported sightings. The legend of the monster is considered a draw for tourism in the Burlington, Vermont and Plattsburg, New York areas.

Like the Loch Ness Monster, while most regard Champ as legend, others have speculated it is possible such a creature does live deep in the lake, possibly a relative of the plesiosaur, an extinct group of aquatic reptiles.

Two Native American tribes living in the area near Lake Champlain, the Iroquois and the Abenaki, had legends about such a creature. The Abenaki called the creature "Tatoskok".

An account of a creature in Lake Champlain was ostensibly given in 1609 by French explorer Samuel de Champlain, the founder of Québec and the lake's namesake, who is supposed to have spotted the creature as he was fighting the Iroquois on the bank of the lake. However, in actuality no such sighting was recorded, and it has since been traced back to a 1970 article.

The first reported sighting actually came in 1883 when Sheriff Nathan H. Mooney claimed that he had seen a “…gigantic water serpent about 50 yards away” from where he was on the shore. He claimed that he was so close that he could see “round white spots inside its mouth” and that “the creature appeared to be about 25 to 30 feet in length”. Mooney’s sighting led to many eyewitnesses coming forward with their own accounts of Champ sightings. Mooney’s story predated the public Loch Ness controversy by 50 years.

Champ became so popular that P.T. Barnum, in the late 19th century, put a reward of $50,000 up for a carcass of Champ. Barnum wanted the carcass of Champ so that he could include it in his epic World’s Fair Show (Krystek 3).

Some believe that Champ may be a plesiosaur similar to “Nessie”, claiming the two lakes have much in common. Like Loch Ness, Lake Champlain is over 400 feet (120 m) deep, and both lakes were formed from retreating glaciers. Believers also claim both lakes support fish populations large enough to feed a supposed sea or lake monster. This legend would require either a single animal, or a sizable breeding population.