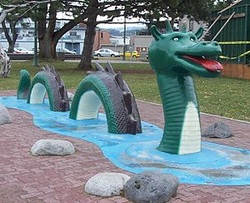 Ogopogo or Naitaka  is the name given to a cryptid lake monster reported to live in Okanagan Lake, in British Columbia, Canada. Ogopogo has been allegedly seen by First Nations people since the 19th century. The most common description of Ogopogo is a 40 to 50-foot-long (12 to 15 m) sea serpent.

British cryptozoologist Karl Shuler has categorized the Ogopogo as a 'many hump' variety of lake monster, and suggested it may be a kind of primitive serpentine whale such as Basilosaurus. However, because the physical evidence for the beast is limited to unclear photographs and film, it has also been suggested that the sightings are misidentifications of common animals, such as otters, and inanimate objects, such as floating logs.

In 1926 a sighting is claimed to have occurred at an Okanagan Mission beach. This event was supposedly witnessed by about thirty cars of people who all claimed to have seen the same thing. In 1968 Art Folden filmed what is claimed to be footage of the alleged creature, showing a large wake moving across the water. A computer analysis of the footage concluded it was a solid, three-dimensional object. In 2011, a cell phone video captured two dark shapes in the water. A suggested explanation is that the video shows two logs.