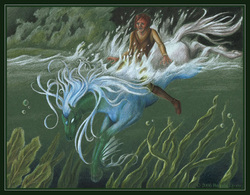 In mythology, the Kelpie is described as a strong and powerful horse. Its hide was supposedly black (though in some stories it was white), and appeared as a lost pony, but could be identified by its constantly dripping mane. Its skin was said to be like that of a seal, smooth but as cold as death when touched. Kelpies were said to transform into beautiful women to lure men into their traps. They created illusions to keep themselves hidden, keeping only their eyes above water to scout the surface.

The fable of the kelpie varies by region. Other versions of the myth describe the kelpie as "green as glass with a black mane and tail that curves over its back like a wheel" or that, even in human form, they are always dripping wet and/or have water weeds in their hair.

The water horse is a common form of the Kelpie, said to lure humans, especially children, into the water to drown and eat them. The water horse would encourage children to ride on its back, and once its victims fell into its trap, the water horse's skin would become adhesive and the horse would bear the children into the river, dragging them to the bottom of the water and devouring them—except the heart or liver. A common Scottish tale is the story of nine children lured onto a Kelpie's back, while a tenth kept his distance. The Kelpie chased the tenth child, but he escaped. Another more gruesome variation on this tale is that the tenth child simply stroked the Kelpie's nose but, when his hand stuck to it, he took a knife from his pocket and cut his own hand off, cauterizing it with wood from a nearby fire. The child saves himself but is unable to help his friends, as they are pulled underwater with the Kelpie.