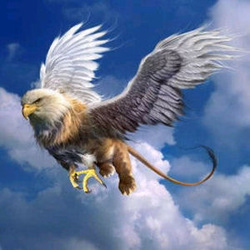 The Griffin is a legendary creature with the head, beak and wings of an eagle, the body of a lion and occasionally the tail of a serpent or scorpion. Its origin lies somewhere in the Middle East where it is found in the paintings and sculptures of the ancient Babylonians, Assyrians and Persians. In Greek mythology, they took gold from the stream Arimaspias and, neighbors of the Hyperboreans, they belonged to Zeus. The later Romans used them for decoration and even in Christian times the Griffin motif often appears. Griffins were frequently used as gargoyles on medieval churches and buildings. In more recent times, the Griffin only appears in literature and heraldry.
They were said to line their nests with gold, killing anyone who dared to steal it from them. In medieval times, it was believed that a Griffin's feathers and claws had magical powers. The feathers were thought to cure blindness. A cub made from a Griffin claw could warn of the presence of poison by changing color.
Because of the griffin's strength and powers of sight, it was believed to guard hidden treasures and in particular the vast gold mines of India and Scythia. The Arimaspians, a bold, one-eyed race of humans, constantly tried to steal their treasure and eventually drove the griffins away the mountains.  Because of its association with the Holy Grail, one of the treasures most commonly guarded by griffins was emeralds.
Other popular treasures guarded by griffins were the Tree of Life, knowledge, and the roads to salvation. Greeks and Romans used griffin images to guard tombs.
The griffin also became the adversary of serpents and basilisks, both of which were seen as embodiments of satanic demons.In its body, the griffin is blessed with the speed, flight, and penetrating vision of the eagle and the strength, courage, and majesty of the lion.