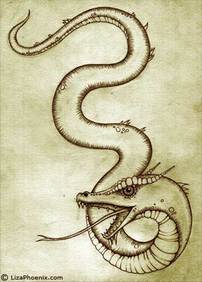 A large wingless, legless dragon. Wyrms have thick, serpentine bodies with a head of  a dragon. Many wyrms are described as having horns. In comparison to Western dragons, reports of wyrms and their legends have attributed them far fewer supernatural powers, although they do have the ability to exhale noxious fumes or even fire. They can be found in swamps, lakes, or even wells.

The wyrm also appears in European lore under the name of Guivre. Another, perhaps comical version of the wyrm can be found under the name Wivre, which was quite malicious. Luckily, the Wivre would only attack a person wearing clothing, so anyone under assault by the vicious creature would simply have to disrobe.